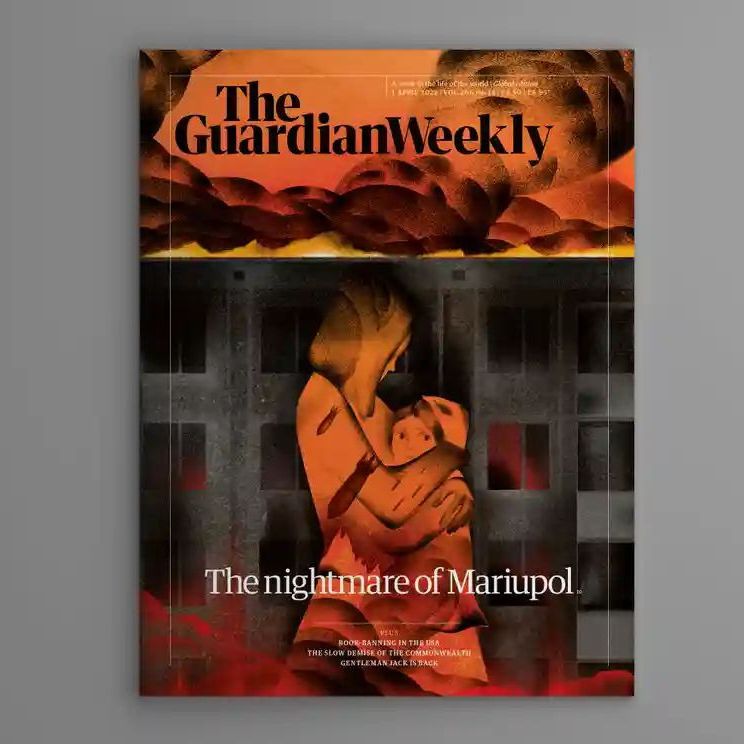 The nightmare of Mariupol: Inside the 1 April Guardian Weekly

Basic Information
The nightmare of Mariupol: Inside the 1 April Guardian Weekly
Description 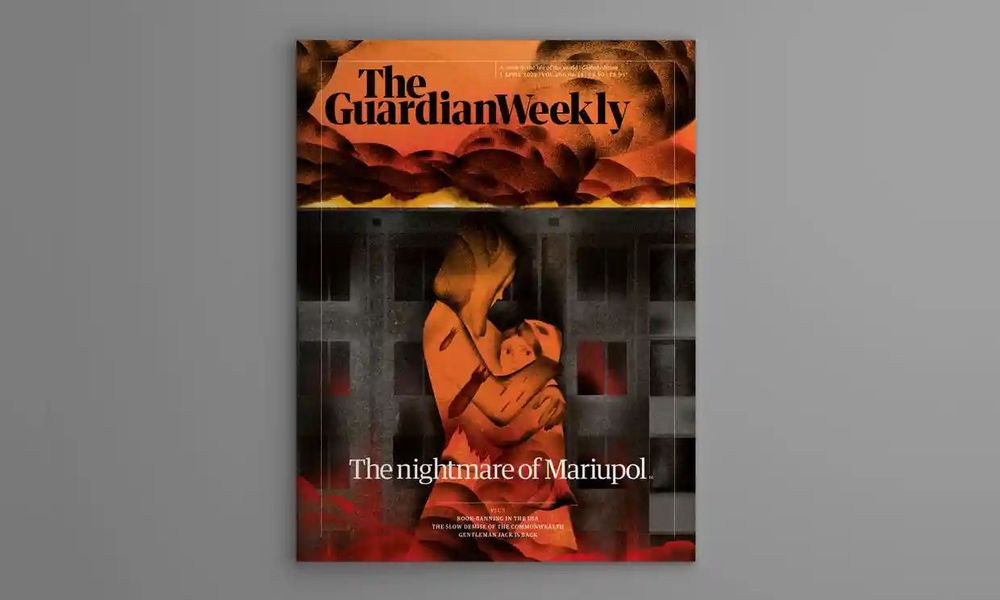 The cover of the 1 April edition of Guardian Weekly. Illustration: Masha Foya/The Guardian

The nightmare of Mariupol: Inside the 1 April Guardian Weekly

The illustrator Masha Foya’s horror at witnessing a full-scale war unfold in her own country over a matter of weeks is captured uncompromisingly in her artwork for the cover of this week’s Guardian Weekly magazine.

“Every time I hear about new crimes against my people, a part of me disappears,” Foya writes from western Ukraine, where she has been living since evacuating from Kyiv. “Every time I think it is impossible for the Russian occupiers to do more shameful acts – but then the morning comes and I learn about even more disgusting things.

“What they did with Mariupol … I just have no words, it’s just the extermination of civilians, this is unforgivable. And this nightmare is happening in the 21st century. But I still do not give up and all of us believe in our victory, believe in the strength of our country!”

In many ways the plight of Mariupol encapsulates the subconscious horror of Russia’s assault on Ukraine. With the besieged port city having long been deemed unsafe by news crews, few clear details now emanate – but what has done so hints at the nightmarish plight of many thousands of people trapped in a ruined city without food, clean water or power. Using diary material from residents, Daniel Boffey pieces together the story of how a city descended from normality to nightmare in a matter of days.

The British royal family was in the news again after a tour of the Caribbean that seemed to cause discomfort on all sides. While the Duke of Cambridge rightly expressed regret about the dark legacy of slavery, his words fell short for many and again raised the question of why the British queen remains head of many of its once-colonised states. We reflect on the tour’s aftermath while, in Opinion, Moya Lothian-McLean outlines why she believes the Commonwealth’s days are drawing to a close.

There aren’t too many global gay icons to have emerged from 19th century Britain but Anne Lister, a Yorkshire businesswoman and prolific diarist, is one. As Gentleman Jack – the dramatised tales of Lister’s life – returns to TV, its creator Sally Wainwright talks to Zoe Williams about her struggles in getting the show to screen.

Get the Guardian Weekly magazine delivered to your door

Russia’s invasion of Ukraine has abruptly transformed the world. Millions have already fled. A new Iron Curtain is grinding into place. An economic war deepens as the military conflict escalates and civilian casualties rise.

It’s our job at the Guardian to decipher a rapidly changing landscape, particularly when it involves a mounting refugee crisis and the risk of unthinkable escalation. Our correspondents are on the ground in Ukraine and throughout the globe delivering round-the-clock reporting and analysis during this perilous situation.

We know there is no substitute for being there – and we’ll stay on the ground, as we did during the 1917 Russian Revolution, the Ukrainian famine of the 1930s, the collapse of the Soviet Union in 1991 and the first Russo-Ukrainian conflict in 2014. We have an illustrious, 200-year history of reporting throughout Europe in times of upheaval, peace and everything in between. We won’t let up now.

Tens of millions have placed their trust in the Guardian’s fearless journalism since we started publishing 200 years ago, turning to us in moments of crisis, uncertainty, solidarity and hope. We’d like to invite you to join more than 1.5 million supporters from 180 countries who now power us financially – keeping us open to all, and fiercely independent.

Unlike many others, the Guardian has no shareholders and no billionaire owner. Just the determination and passion to deliver high-impact global reporting, always free from commercial or political influence. Reporting like this is vital to establish the facts: who is lying and who is telling the truth.

And we provide all this for free, for everyone to read. We do this because we believe in information equality. Greater numbers of people can keep track of the global events shaping our world, understand their impact on people and communities, and become inspired to take meaningful action. Millions can benefit from open access to quality, truthful news, regardless of their ability to pay for it.

If there were ever a time to join us, it is now. Every contribution, however big or small, powers our journalism and sustains our future.