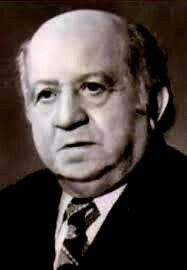 Yosyp Bulhbinder was born in the town of Cherniakhiv (today’s Zhytomyr region), where he graduated from a Jewish school for proletarian youth (1923). In 1925–1929, Bukhbinder studied at Odesa Jewish Pedagogical College and in 1935, he graduated from the Faculty of History of the Jewish department of Kyiv Pedagogical Institute. His professional literary activity began in the 1930s when he was a literary employee of the Ukrainian republican Yiddish newspaper Der Shtern (The Star).

During World War II, Yosyp Bukhbinder was evacuated to Ufa (Russia’s Bashkortostan) and worked in the Ukrainian Literary Fund. After the war, he took care of organisational issues of the Jewish department of Ukraine’s Writers Union. On assignment of the Jewish Anti-Fascist Committee, he wrote essays on the postwar recorstruction of Ukrainian economy.

On 24 January 1951, Bukhbinder was expelled from the Writers Union, having been accused of “Jewish nationalism”, and arrested two days later. He was sentenced to 10 years of forced labour camps. For some time, he was held in one prison cell with Metropolitan Josyf Slipyj, Major Archbishop of the Ukrainian Greek Catholic Church, whom the writer would mention in his memoirs. In 1954, Bukhbinder was released yet the false charges of anti-Soviet activity were dropped only after his amnesty in January 1957. He died in Kyiv in 1993.

Manuscripts of poetic and prose writings are surely the most precious items of the collection. Among them are the novels and stories Inside the Yacht (Yiddish, 1966–1967), Some Pages from My Diary (Emanuil Is Telling…) (Yiddish, no date), Pages from My Diary(Yiddish original and Russian translation, no date), and Between the Waves (Yiddish original and Ukrainian translation, 1970), preparatory materials to them as well as more than 300 poems and their translations into Russian and Ukrainian. The text entitled Pages from My Diary is of particular value as a unique ego-document about the Gulag written in Yiddish.

Some writings are in multiple versions. It would be interesting to compare these manuscripts to their printed versions in order to determine the degree of the editorial interference in the author’s text. Thus, Yosyp Bukhbinder’s creative legacy is waiting for thorough literary analysis.

There are about 50 photographs of Yosyp Bukhbinder, his family, and other people in the writer’s archive. Most of them are not signed, hence it is difficult to date the images and define persons in them. That is why the photo archive needs to be researched in detail.

The historians who study the Stalinist campaign of “fighting cosmopolitanism” might be interested in personal documents of Yosyp Bukhbinder and his family, for example, messages from the Procuracy and the Supreme Court of the USSR regarding the writer’s amnesty (1954), a certificate of exoneration and removal of criminal record (1957), an excerpt from the minutes of the meeting at the Writers Union of the USSR concerning the validation of Bukhbinder’s working experience (1968), and the archival references from the Interior Ministry of the Kazakh SSR (1991).

Correspondence. The archive contains more than 200 letters, postcards, and telegrams from 1941–1992, some of which are undated. Worth attention are letters that describe World War II events (evacuation of civilians from Kyiv to Ufa and reconstruction of Kyiv after its liberation from the Nazis). Bukhbinder’s correspondence with his fellow writers is of great importance for the historians of Soviet Yiddish literature. Aron Verhelis, Oleksandr Lizen, the relatives of Isaak Kipnis and Itzik Fefer as well as the translators of Bukhbinder’s works into Russian, Yelena Akselrod and Mikhail Vainer, were among his most active correspondents.

The archive also contains materials on the Soviet-era activity of the Writers Union of Ukraine, such as petitions for the restoration of Bukhbinder’s membership in the Union (1957) and for his reinstatement in the position of museum department head (1966), an invitation to the meeting of Ukrainian and Jewish writers (1967), etc.